It’s been 3 years since I’ve done #AskRobby. Three whole years. A lot has happened since. I will use this time to answer random questions I fielded off of #TheTwitter.

Grew up in Brooklyn, live in Queens, if y’all dont know.

Brooklyn was the shit growing up. Brooklyn is now a gentrified shell of itself, that I am complicit in, because I still hang out there and spend money there. It’s still beautiful out there, and definitely safer than it was when I was a kid, but its still very jarring, and I feel like shit if I really think about it. I really do wanna move back next year, but I don’t wanna be on the outskirts.

Queens is nice and quiet and mostly safe. But it’s far as shit from everything. It has, however, retained more of its soul than Brooklyn has; this won’t be true for long, as Astoria and LIC have become destinations. I love both places but its crystal clear where my heart lies. I really do have a thing for NYC, but I sometimes think I really need to leave it behind. With that said, the things that are happening with my writing career, I pretty much benefit from staying here. Conundrum!

First off, this shit ain’t happening.

But if it does, I’m gonna be somewhere biting a hard copy of Keef’s “Finally Rich” in half. Right down the middle. Like a Hungry Hungry Hippo who’s a fan of a mediocre team that causes him lots of emotional pain. I think we’ll be good this year, but even if we aren’t, Odell will likely unveil lots of #urban #youth dances.

It’s gotta be spastically dancing to  Crystal Water’s “Gypsy Woman” as a kid (my parents were way into House, this is the song that sticks out in my childhood memories) or playing with my MC Hammer doll and watching the 2 Legit To Quit video. I pretty much every “Gypsy Woman” flip is hard (and there are TONS). As a little Robby, I wanted to be Hammer. I remember holding the doll in my hand and staring at the haircut like “I WANT A CUT LIKE THAT!”. It also came with a cassette….I definitely made my parents play the hell out of the tape. Now, my shirt is never really closed, just like Hammer. Those repeated listens of Crystal Water’s biggest hit has to have lead to me thinking Broke With Expensive Taste is a GREAT album.

I was MAYBE six years old, and my mom gave me a notebook to write in. Just to write whatever I wanted. It was night time in Williamsburg, and the sky was kind of always purple in the dead of night over there. It started raining, so  sat my bedroom window and watched the rain hit the glass. Next thing you know, I’m writing shitty poetry about raindrops. BOOM. WRITER IS BORN.

I highkey did not like writing until I was damn near…..17? My favorite English teacher convinced me I was good and I kept at it. Tons of random personal blogs later and it became real. Also, I never really went back to poetry, I might’ve written all of 4-5 poems in my entire life, it’s not really my medium. I put 2 poems on IG a few years ago to pretty good reception; I might go back to it soon, ya never know. I’m a romantic poem guy, I can’t help it.

Ok, so, I sorta don’t understand what exactly this tweet is asking. I could ask for clarity but, no, clarity is not what we do here. I’m gonna guess this is a “how many women have you recklessly  let it off in” question. The answer to that would be 0, I am way too paranoid about my skeet to just let my meat Uzi off sans any sort of birth safeguard. I don’t have time for kids, that would really cut into my “lying on Twitter/eating buffalo wings” schedule. You Twitter people are #too #wild.

(Naw deadass, how do you people just leave it in women then go to sleep peacefully??? My nerves are too bad for that shit, the hell wrong with y’all) 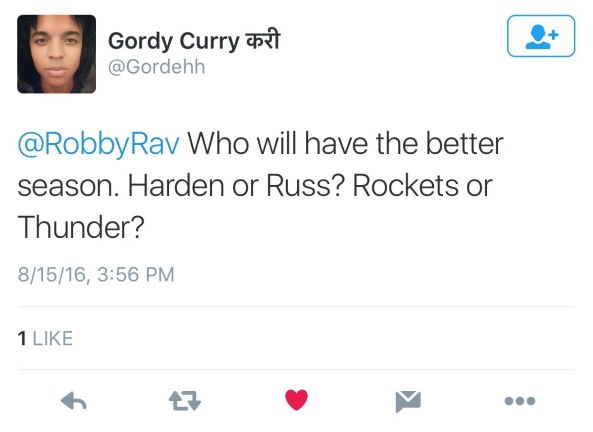 I don’t really expect either team to end the season in the upper half of the Western Conference (what a mild ass take this was). I am not of the belief that Russ is just gonna go bonkers and turn into even more of a monster because now he’s “free” of the “burden” of the best scorer in the got damn NBA. I think the Thunder will have an ok season, but this “RUSS MVP!” shit is terribly overblown.

The Rockets have D’Antoni, Harden, Back From The Dead Eric Gordon, and Ryan Anderson. A lot of 3’s are getting a shot, a lot of running will be gunning, and no one is playing any defense. They GOTTA be a top 3 League Pass team off the strength. I don’t think they are gonna win a ton of games, but they are gonna beat more asses thank people think.

Thunder will have the better season as a team, but Harden will have the superior individual season. He finally has people to pass to who will actually make jumpers, as opposed to clanging the absolute shit out of them on national TV.

Biggest lesson I learned this year is that patience actually works. I frequently feel urges to make impulsive and poorly thought out decisions, to get what I want. In reality, just waiting, working towards something, and believing everything will align is enough. The point is: you have to do all 3. I wasn’t doing all three until late 2015. There are aspects of my life that are extremely aggravating, but I personally feel like I’m living the dream. I am well on the way to having whatever I want, and I have found most of the things/feelings/situations I sought after, because I was patient. I also recognized the important of improving yourself for the journey that lies ahead; there is a magic in getting ready for goals you can’t really see yet. Being ready so you don’t have to get ready is very very important.

This was fun. Let’s do it in another 3 years.